How to Prevent Sickness Presenteeism in a Remote-First Environment

How to Prevent Sickness Presenteeism in a Remote-First Environment 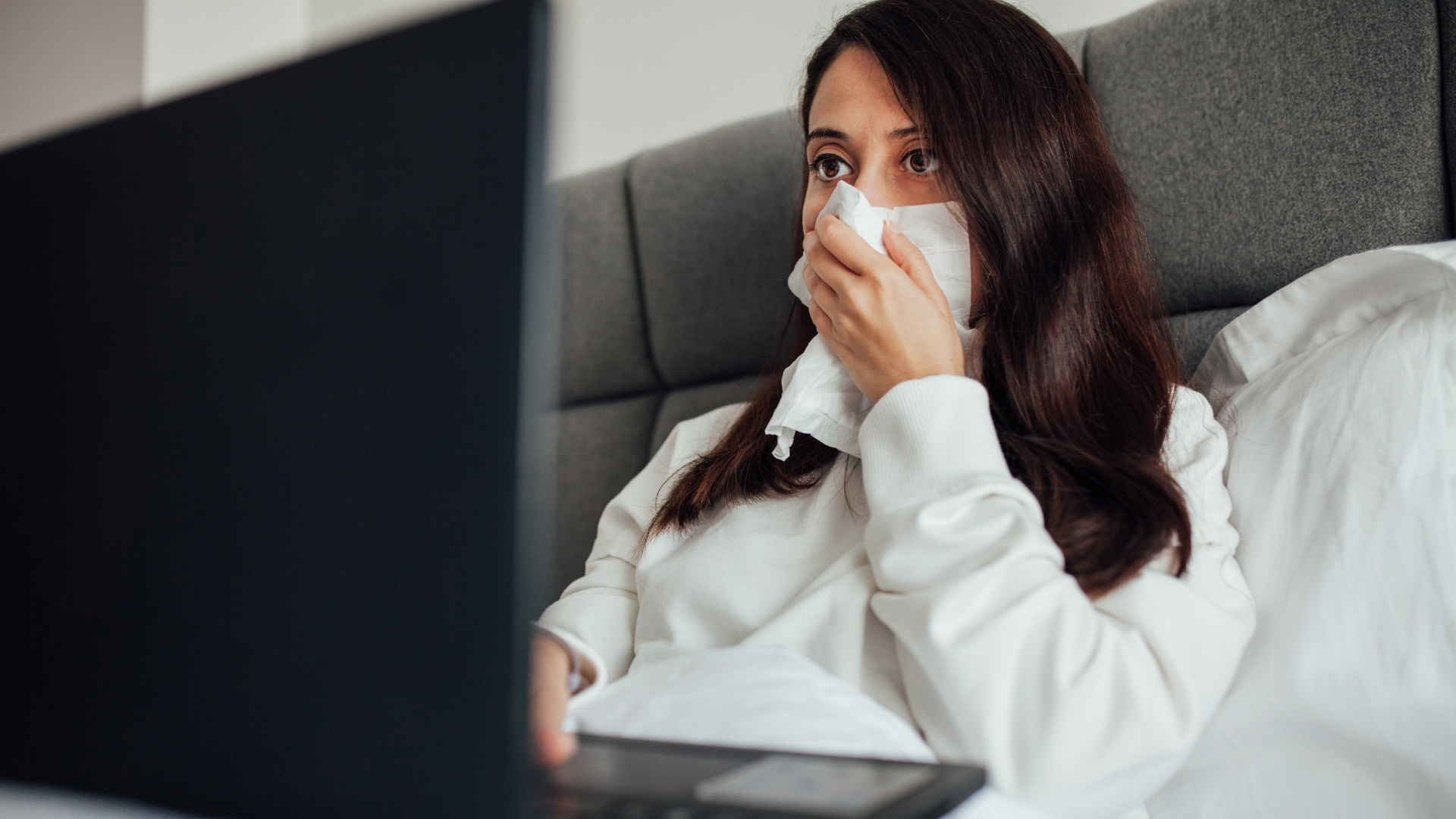 In a remote-first environment, it's easy for employees to feel like they can work from home whenever they're not feeling well. After all, they do not run the risk of infecting their colleagues with the latest bug as they are not in the office.

And isn't it better that they sign in and get some work done rather than wasting the day? Sickness presenteeism is a type of presenteeism where employees attempt to do work but are not fully engaged or productive, usually because of illness.

Working from home has meant that absenteeism rates have fallen. People are a lot less likely to take sick days now. In fact, the average employee used to take around 7 sick days per year in 1993. In 2020, this has fallen to around 3.5. The figures show that presenteeism in remote work is particularly prevalent.

And while employees signing in sick may have noble intentions, they are doing more damage than they realize.

The financial impacts on a company can be staggering. But how can businesses prevent presenteeism?

Remote working shouldn't be an excuse to sign in when sick. Companies should champion a strong work-life balance, leaders should set an example, and robust policies should be in place to prevent and tackle presenteeism.

The impacts of presenteeism on the employee

Remote workers can experience severe health impacts as a result of presenteeism. Presenteeism can lead to burnout, depression, anxiety, and a host of other mental health issues. It can also lead to physical health problems, as the body is more susceptible to illness when it is run down.

Studies have linked higher levels of stress and burnout directly to presenteeism. A Deloitte survey found that 77% of employees have experienced burnout at their current job. A severe case of burnout can result in long-term absences. In fact, 54% of all workdays lost in the UK in 2018/2019 were due to work-related stress, depression, or anxiety rather than any specific health condition.

Working when sick can also have a negative impact on productivity. A study by the University of Sheffield found that employees who come into work when they are ill are significantly less productive. Developing any kind of physical impairment led to a doubling in the probability of reduced productivity at work. While working while experiencing poor mental health resulted in a threefold decrease in productivity.

One of the best ways to tackle presenteeism is by encouraging a strong work-life balance. This means that employees feel they can take time off when they are sick without fearing negative impacts on their career.

It is key that taking sick leave is not seen negatively. Employers who discourage workers from taking sickness absence, whether explicitly or implicitly, are wilfully entering into a vicious cycle of sickness presenteeism fueled by job insecurity.

A US study drew a parallel between perceived job insecurity and stress and mental strain. Employees who felt their job was at a risk reported higher levels of mental strain. In turn, this leads to increased presenteeism due to a fear of taking sick leave.

But how can employers promote employee wellbeing and encourage workers to take time off when they are in poor health?

If presenteeism levels have risen recently, a workplace culture overhaul may be necessary.

For instance, employers should ensure employees are taking regular breaks during the day. This can be done by encouraging employees to take their full lunch break and making sure they take regular screen breaks. This is especially important in a remote-first environment where employees may work longer hours and take less screen breaks, leading to mental strain.

Offering remote employees flexibility is another way to create a culture that values employee wellbeing and promotes job security. Is there a work/ family conflict that needs resolving? Unless the employee needs to complete something urgently, encourage them to tend to their family and return to work later.

It's also important to encourage employees to use their vacation days. One way to do this is by having a 'use it or lose it' policy in place. This means that employees who don't use their annual leave will forfeit it. Make it clear that nothing is more important than taking leave. Honor holiday requests and don't make people explain why they're requesting leave.

The always-on culture that seems prevalent in certain remote companies can be toxic. Make sure your employees know they are not being judged on the hours worked but rather on their results. Measure productivity based on the work handed in, not based on the long hours spent at the kitchen table staring at a screen.

Shout out people based on the work they've delivered, not based on the hours they've worked. If you're interested in learning more about measuring productivity rather than hours worked, we have a great article here.

Creating a work culture that offers employees flexibility, trust, and a focus on wellbeing will encourage employees to speak up when they feel unwell and take the break they need.

Preventing presenteeism by setting an example

As a leader, it's important to set the tone for the rest of the company. If a leader is working long hours, team members will feel pressured to do the same. Instead, leaders should focus on being productive during their regular working hours and take the time off when they need it. This will set the tone for employees to take a step back when they need to. Further, it will show the company's commitment to wellbeing.

One practical way to do this is by using their email signature.

For example, leaders can incorporate language like this in their own email signatures: "I read and respond to messages in my own working hours, but I do not expect a response outside of your regular working hours."

This will send a strong message about the work practices of senior leaders. It will also implicitly give employees 'permission' to respond when they have the opportunity rather than as soon as the message pops up in their inbox. Remote work can sometimes encourage an 'always on' mentality which can lead to presenteeism.

Leaders should also visibly take time off when they're sick. They should make sure they are seen to take time off. This sends a strong message that being sick is not something to be ashamed of and that it's important to rest when you're unwell.

By setting the tone for the company, leaders can prevent presenteeism from occurring in the first place. If employees see their leaders taking care of themselves, they'll be more likely to do the same.

Equally, leaders should show that mental health breaks are necessary and encouraged. Whether they took a morning off to recharge, or a couple of days off to destress after a challenging project, leaders must be seen to be taking the first step if they wish to see employees follow suit.

It's all very well creating great initiatives like a monthly mental health day where workers can take a day off to look after their mental health every month. But if leaders aren't seen making use of these days themselves, then employees will likely steer clear too.

By setting an example through managerial practices and creating a culture that values employee wellbeing, leaders can prevent presenteeism from taking over their remote-first company.

In order to prevent presenteeism, it's important to have robust policies in place to tackle presenteeism. Saying presenteeism is discouraged is one thing. Explaining why and what employees should do when they feel unwell works far better.

A robust presenteeism policy for employees working remotely could help prevent and tackle the worst consequences of presenteeism.

The policy should be a crucial part of the company handbook and should be designed to encourage employees to focus on their wellbeing and discourage them from working when they're unwell.

Some things that can be included in the company handbook to discourage presenteeism include:

Other policies may also need an overhaul.

For instance, if a company's sick leave policy requires employees to attend a 'back to work' interview after taking time off, to provide doctor's notes, or to jump through hoops to take a sick day, this may encourage presenteeism.

Instead, sick leave policies should come from a place of trust. If an employee is seemingly taking more sick days than they should, this should be approached with empathy, rather than disciplinary action.

Policies like these will send a strong message that the company is committed to employee wellbeing. They will also create an environment where employees feel comfortable speaking up about their mental health and taking the time off they need.

In a remote-first environment, it can be easy for employees to feel like they can work from home whenever they're not feeling well. This can have detrimental consequences for the business and employees.

Companies can prevent presenteeism by encouraging a strong work-life balance, tackling perceptions of job insecurity, having leadership set an example by taking sick leave and encouraging others to do the same, and creating robust policies while overhauling outdated policies that penalize workers for taking sick leave.

Focusing on cultivating a culture that fosters trust and empathy will help create a healthy work culture where employees are able to take care of their health without jeopardizing their job security or livelihood.